Coffee Meets Bagel is a dating app that I always thought had a lot of potential. The cutesy-named dating app launched in 2012, positioning itself as the “anti-Tinder,” designed to help people make meaingful, lasting connections.

Coffee Meets Bagel was created by three sisters and relied on social media and an algorithm to pair “coffees” with “bagels.” The founders of Coffee Meets Bagel even appeared on Shark Tank (they famously walked away from $30 million, one of the biggest deals in Shark Tank history) and later raised $23.2 million.

Check out a clip of their Shark Tank appearance here:

There was a moment when I loved Coffee Meets Bagel and used it regularly. Back when dating apps were all about swiping, it did stand out, thanks to its use of prompts and the small daily selection of profiles.

But Coffee Meets Bagel never really caught on the same way that Tinder, Hinge, or Bumble did. From my own experience, there’s not a lot of activity and engagement on the app, which doesn’t make it a winning dating app. However, the free version can make Coffee Meets Bagel worth a try.

If you’re looking for a more active dating community for serious dating, we recommend eharmony, which has 750,000 paid subscribers and 10 million active users.

Or, keep reading to learn more about Coffee Meets Bagel:

How does Coffee Meets Bagel work?

Creating a Coffee Meets Bagel profile is pretty much the same as other dating apps: add photos, fill out basic details about yourself (age, location, job title, etc.), and then you’re presented with different prompts to choose from. Examples include:

“What never fails to make you laugh”

Coffee Meets Bagel recommends filling out at least three to make your profile more robust. Lastly, you are awarded free “beans” to start. Beans are used as currency; you can use them to “like” profiles on your discover page and to extend matches and conversations beyond the one-week window.

There are three ways to interact with profiles:

Every day at noon, Coffee Meets Bagel gives you several suggested “bagels” to match with. In my experience, I’ve gotten as few as three daily suggestions to as many as eight per day. These matches are supposed to be curated using an algorithm that takes into consideration your preferences and previous likes, but I didn’t find them personal at all. Some I noticed were repeats of who I saw in the discover page. Others I saw in other dating apps. And some didn’t live within the five-mile radius that I set up.

Coffee Meets Bagel’s “Discover” page allows you to explore other potential bagels that don’t necessarily fit your criteria. You can use the search function to filter profiles based on location, ethnicity, etc.

This Coffee Meets Bagel page features profiles of people who already like you. You can get one profile view a day, but you’ll need to upgrade to premium to see the rest.

Personally, I didn’t feel like my matches were curated at all (but let’s face it, when are they ever on dating apps?). While I’m sure these bagels are nice people, I normally don’t buy into the algorithm BS and think that these same guys are being shown to everyone else. I’ve noticed a few profiles appear on my daily suggestions that I already saw on my Discover page.

Once you match with someone, you have one week to chat with them until the match expires.

What age group is on Coffee Meets Bagel?

I set my age range from 21 to 40 to get a good idea of who's using the app. While I did see some profiles from 40-year old guys and some from 23-year old guys, the majority of the profiles I saw were in their mid-to-late 20s or late 30s.

How much does Coffee Meets Bagel cost?

Coffee Meets Bagel is free to use, but they offer three premium membership payment options:

Here's you get with a premium membership:

You can choose a mini membership for $9 per month that offers:

If you don’t want to upgrade to the premium package, you can also purchase additional beans to use throughout the app:

You can get free beans by liking Coffee Meets Bagel’s social handles and through referral links.

Can you use Coffee Meets Bagel for free?

Yes, you can use Coffee Meets Bagel for free (and I strongly recommend it). While the app’s free version is very basic (only allows you to like and message other profiles for free), that’s all you really need from a dating app.

Yes, Coffee Meets Bagel is a good dating site. Is it the best dating site? Personally, I don’t think so.

Below are my pros and cons to Coffee Meets Bagel:

The limited number of suggested matches makes it easy not to fall down a swiping rabbit hole. That’s great for people who are really busy or get overwhelmed easily on dating apps.

CMB prompts encourage you to be detailed in your responses, and I like any dating app that makes you fill out prompts. It helps you find things to talk about with your matches beyond the generic “Hey, what's up?”

Chats are active for a week — enough time for a quick banter before scheduling your first date.

Coffee Meets Bagel has way more female users than males. This makes sense given that it was created by women who had poor experiences on Tinder. I even noticed that they were running out of profiles to show me.

Other dating apps like OkCupid, Tinder, and Bumble are constantly finding new ways for people to interact and engage with their products, but the Coffee Meets Bagel app is pretty much the same as it was when it first launched.

It has a weak algorithm.

Compared to the dating apps with more sophisticated algorithms, such as eharmony and OkCupid, Coffee Meets Bagel’s algorithm doesn’t cut it.

I was specific about wanting to match with guys within 5 miles from Brooklyn, and I got people from Jersey City or the Bronx (not within 5 miles). It tells me that there aren’t a lot of people using Coffee Meets Bagel (and I live in NYC).

Like most dating apps, Coffee Meets Bagel is not accredited by the Better Business Bureau. It currently has an F rating with multiple complaints from people who got banned from the app. It has a 1.5 rating on Trustpilot and tons of reviews with complaints about getting swindled and scammed.

There were also lots of complaints from people who were disappointed about their matches. One reviewer noticed she was getting inactive profiles after she saw a profile of a guy who she knew recently got engaged. Others complain about the lack of attractive people on the app. Of course, that will all depend on where you live (and whom you find attractive).

One Redditor met their fiancé on the app, and another says they get more matches on Coffee Meets Bagel than other dating sites. It proves that the dating app experience varies depending on the person, age, and location.

Is Coffee Meets Bagel worth paying for?

I’m from NYC, and I noticed a lot of profiles that I saw on other dating apps. If you live in a big city, there’s no harm in trying it. But I don’t think you’re missing out.

If you’re looking to find a long-term relationship, eharmony is our top choice for online dating because:

Interested in checking out other dating sites and apps? Here are some dating app reviews:

How does Coffee Meets Bagel work?

Creating a Coffee Meets Bagel profile is pretty much the same as other dating apps: you add photos, fill out basic details about yourself (age, location, job title, etc.), and then you’re presented with different prompts to choose from.

What age group is on Coffee Meets Bagel?

The majority of the profiles I saw were in their mid-to-late 20s or late 30s.

How much does Coffee Meets Bagel cost?

Is Coffee Meets Bagel worth paying for?

No, I don’t think Coffee Meets Bagel is worth paying for. For me, there aren’t enough people on the app to make it worth the money. 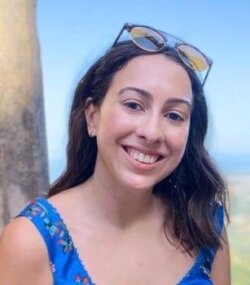 Bianca Mendez is a writer and editor living in New York City. Her work has appeared in Women’s Health, Bustle, Well+Good, Latina, Refinery29, and many other publications. She also served as a sex and dating editor at Elite Daily and was a freelance lifestyle editor for Bauer Publishing’s Teen Department, where she helped the team launch three new magazines. Bianca's LinkedIn profile